A Yen for a Bull Market 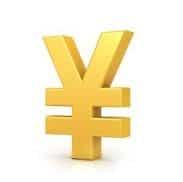 Currencies can be ideal markets for trend followers. The macro fundamentals that move the currencies tend to persist for long periods of time. This gives traders plenty of time to get on board and a plethora of setups for getting in and out of trades. One great example of this is the Japanese yen.

From the 2007 bottom, the yen rallied for nearly four and a half years. As Japan kept sinking further and further into deflationary quicksand, the currency advanced like a skilled Samurai warrior of old. Consider how the events unfolded:

The Nikkei (Japan’s stock market) peaked in 2007. This pushed investors back into cash and propped up the yen. This was the beginning of a “risk off” environment.

Two years later, the world watched in horror as Japan was rocked with a 9.0 magnitude earthquake on March 11, 2011. The resulting tsunami killed tens of thousands of people and caused the infamous Fukushima disaster at the nuclear power plant. Volatility in the yen surged as the currency rocketed higher for five days and touched a multi-year high, reversed and went into a freefall for three weeks as it sank to a multi-month low, then finally bottomed out in the first week of April. From there the yen began another multi-month push to new record highs.

Once the final high was established, there was no bell rang to announce the start of a new bear market. Just like the ninjas in the movies that sneak into the village at night, the new bear market in the yen started in stealth mode as the currency chopped around in a sideways fashion for a few months. But the trap was being set. Here’s what transpired in the current bear market:

After a few months of directionless trading, the Japanese yen started to crater in February of 2012. The Bank of Japan surprised everyone on Valentine’s Day when they stepped up their economic stimulus measures and expanded their asset-purchase program by 50%. This caused the yen to close below its widely-watched 200-day moving average for the first time in twenty-two months and trigger program-selling.

It would not be surprising to learn someday that the BOJ timed the announcement with the break of the 200-day MA in order to maximize their effect. That would be a pretty shrewd move. The world may never know.

After bottoming in mid-March, the yen underwent a rally into September. However, it never did get back up to the February highs. The damage was already done. The fourth quarter was an onslaught of three straight losing months with the year ending at a new twenty-eight month low.

Shinzō Abe was put back into place as the Prime Minister of Japan in late December 2012. His policies of fiscal stimulus, monetary easing and structural reforms continued to crush the yen. The BOJ announced its quantitative easing program in April 2013 where they would buy ¥60 to ¥70 trillion of bonds a year. On Halloween of 2014 the BOJ bumped it up a bit to ¥80 trillion of bonds a year.

The bear market in the yen certainly had its benefits. The economy improved and the stock market soared from late 2012 thru mid-2015, so the currency decline in Japan was never challenged. How can you complain about that?

Revenge of the Samurai

There are two important rules to bear (pun intended) in mind here. First, trends in the yen can persist. This is obvious as the prior bull market lasted over four years and the current bear market has been in play for over four years as well.

Secondly, trends in the yen eventually change. Traders seem to have a harder time remembering this rule. It’s an important one to learn, though. Continuing to short the yen after the bear market has run its course will be financial hara–kiri. There is nothing honorable or profitable about this in the trading world, so don’t do it.

Fundamentally, it is possible that the trend for the yen is now changing. Remember how the yen spiked during the August stock market correction? The currency tipped its hand that it was a “risk off” benefactor. It’s been happening again since the start of the year with the yen climbing in response to a spike in Middle East tensions, collapsing oil prices, and a sharp break in stock markets around the world. Several stock markets have already dipped into bear market territory. Buying the currency of a nation with an account surplus is certainly a safer alternative than holding the currency of a nation that’s running up an unsustainable tab when the ‘you-know-what’ finally hits the fan. And thanks to the currency collapse in the fourth-largest export economy in the world, Japan now has an account surplus. If the current US stock market correction turns into a full-blown bear market the yen should continue to benefit.

Here’s where the plot thickens: Last week, the Bank of Japan caught everyone off guard when they not only stuck to their ¥80 trillion ($666 million) bond-buying target, but they introduced a negative interest rate policy as well. As one would expect, this initially hammered the yen on ideas that Abenomics is not over yet. However, the yen recovered all of the losses and then some just a few days later. Chalk that one up to weaker-than-expected economic data in the US causing an abrupt downward adjustment in the probabilities of more US rate hikes in the pipeline for this year. In December, the markets had the odds of a 2016 rate hike set at 93%. After last week’s price adjustment, though, the odds have now dropped below 50%. Because of this, the greenback experienced its worst two-day break since last March and the yen is poised to finish the week with its biggest weekly gain since 2009. If this trend continues, 2016 could be the year that the Land of the Rising Sun becomes the Land of the Rising Yen.

Fundamentals aside, looking at the price of the Japanese yen on its own is quite revealing. First of all, the Japanese yen plunged as much as 5,269 basis-points from the 2011 record high. This is close in size to the 1995-1998 bear market decline of 5,632 basis-points, which is the largest decline in the last four decades.

Another interesting point is that the Japanese yen did not go into meltdown-mode after it undercut major price support at the 2007 bear market low in May and then the psychological 8000 mark in June. Instead of accelerating lower, the yen went into consolidation. If the market is no longer declining during a bear market, one has to wonder if that’s the end of the ride. If anything, it’s a good reason to start covering short positions. 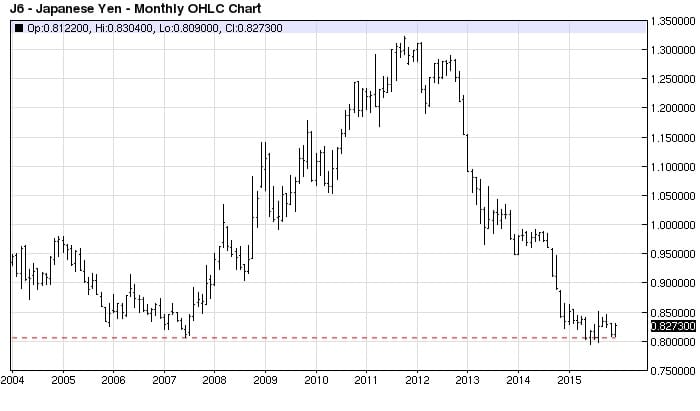 Back in August, the yen made a huge ‘outside bar’ with an upward reversal on the monthly timeframe when it dropped to a two-month low in the first half of the month and then exploded to a six and a half month high in the second half of the month. Then yen was then trapped inside the August price range for the rest of the year. A breakout above the August price range occurred in January. Despite the sharp pullback, the yen is once again back above the August high. This confirmed the upside reversal signal that occurred that month and is a sign of strong demand.

Additionally, the 2015 price range was the smallest annual price range (in percentage terms) in nearly forty years. This low volatility after several years of declining price is another strong clue that the bearish trend is coming to an end. A breakout above last year’s high of .008629 would confirm it. That almost happened last month.

Yin or Yang? Bull or Bear?

I’ll share a great trend identification signal with you that investors and traders can confidently use to determine whether to be bullish or bearish on the Japanese yen. It’s extremely simple. So simple, I’m almost embarrassed to tell you what it is. But it certainly is effective. As a matter of fact, it works so well that you can probably get away with skipping the fundamental work altogether and just use this tool on its own.

If the cash Japanese yen makes a month-end close (minimum of 25 basis-points) above the monthly 20-bar Moving Average, be bullish and be long. The currency is in an uptrend.

If the cash Japanese yen makes a month-end close (minimum of 25 basis-points) below the monthly 20-bar Moving Average, be bearish and be short. The currency is in a downtrend.

How It All Went Down…and Up

Over the last three decades, this trend identification signal has been highly accurate for the Japanese yen. It is simple, yet elegant. A month-end close above/below the 20-bar Moving Average waves the checkered flag to tell you that the race has started and which direction you should be heading. Take a look at the trend change signals over the last three decades and what transpired afterward: 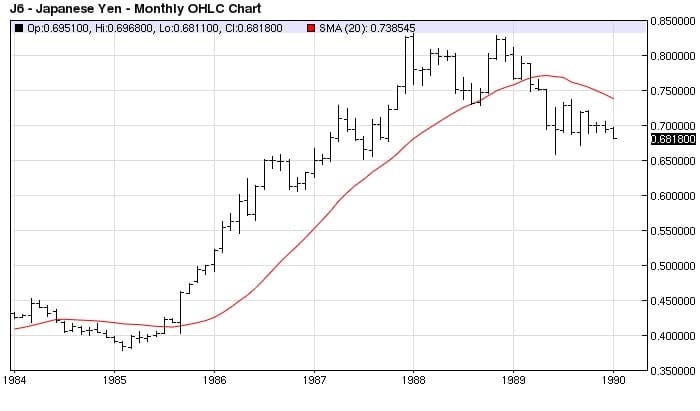 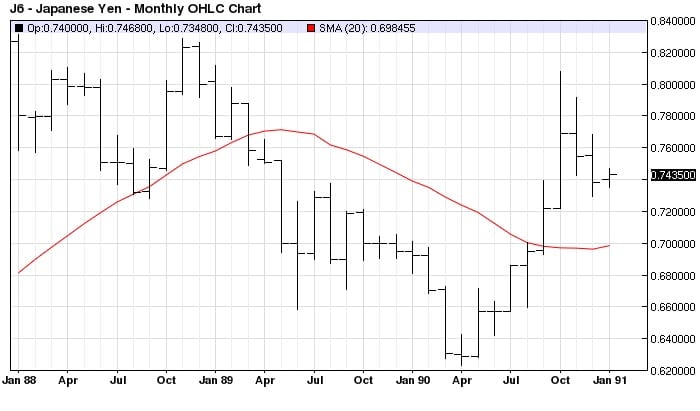 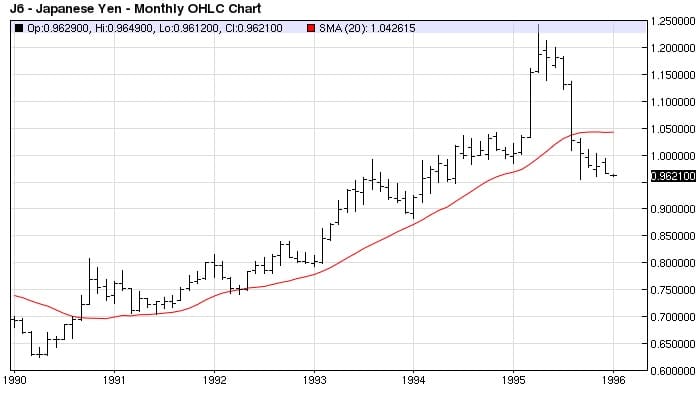 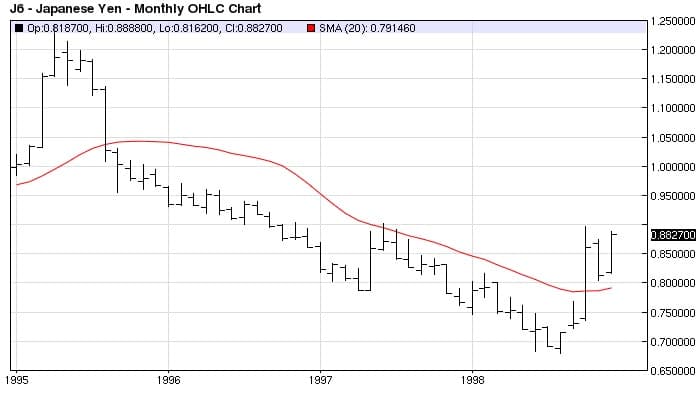 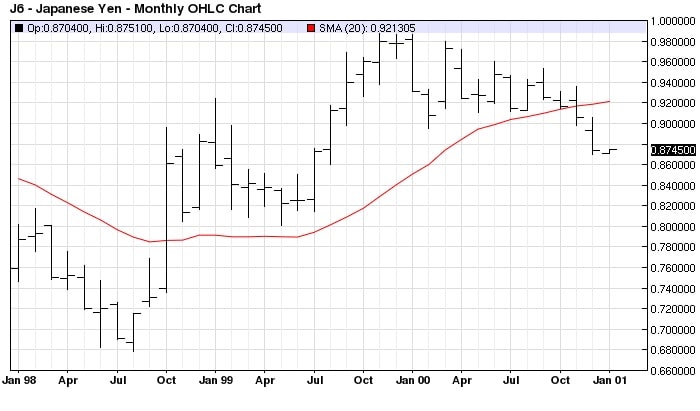 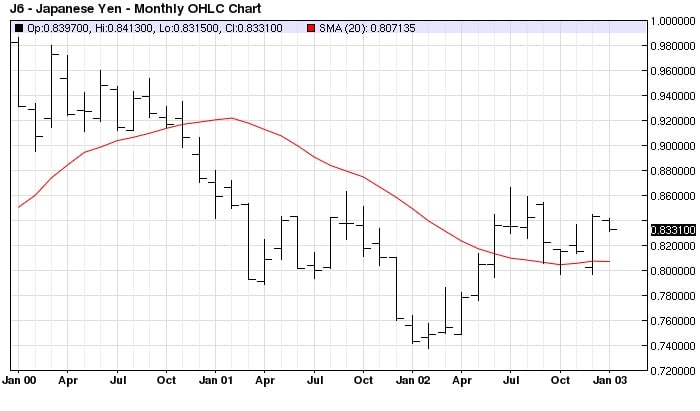 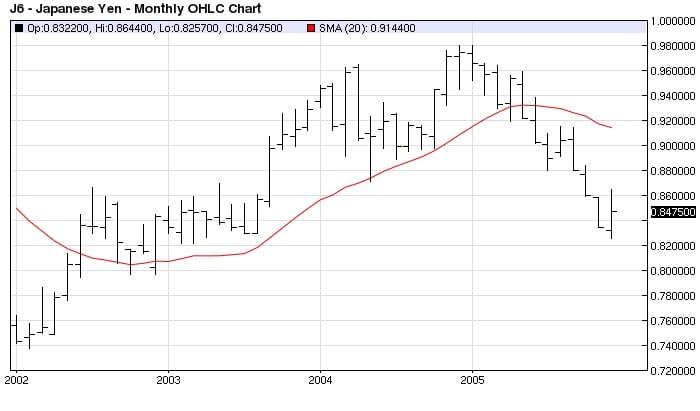 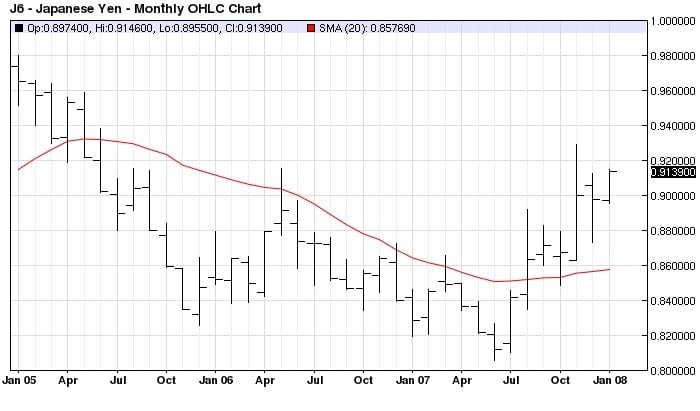 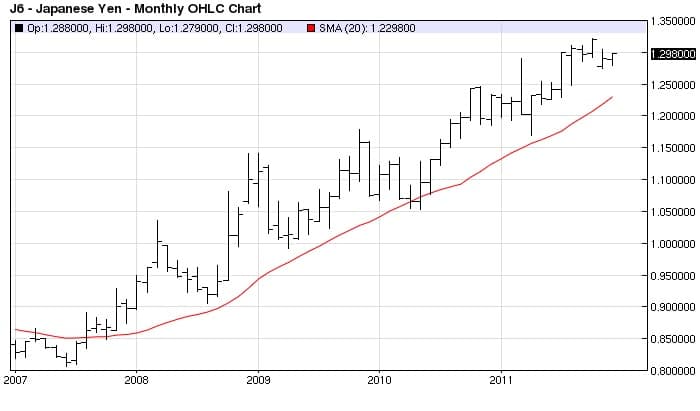 February 2012: The yen made a month-end close (minimum of 25 basis-points) below the 20-bar Moving Average for the first time in four and a half years. It dropped another -420 basis-points (a little over 3%) into the following month’s low.

May 2012: The yen made a month-end close (minimum of 25 basis-points) above the 20-bar Moving Average for the first time since January. It rallied another +140 basis-points (1%) into the September high. 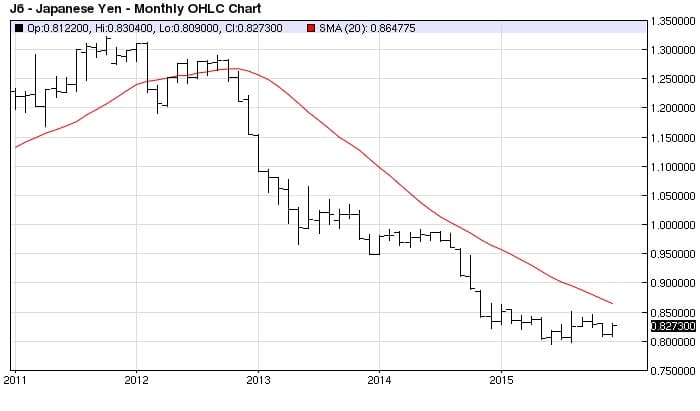 As you can see, the trend identification signals were mostly correct. The Japanese yen usually ran for several months or even years in the direction of the trend change signal. Traders had plenty of time afterwards to get involved and take advantage of the trend.

What It Is Not

Keep in mind that this trend identification signal does not tell you where the tops and the bottoms are. It simply tell you when the yen has moved in a particular direction far enough to identify it as a trend on the macro timeframe. While we’re at it, here are a few other things this signal does not do:

It does not tell you what price the yen should go to. It’s a lagging indicator that tells you the direction.

It does not tell you where you should enter and exit your positions. You should have your own rules for that.

It does not tell you how big of a position you should have. That’s where your risk management plan comes in.

Clues to Watch For

A month-end close (minimum of 25 basis-points) above the 20-bar Moving Average (currently around .008506) for the first time since September of 2012 would signal a bullish trend change. As we demonstrated earlier, this is a highly accurate trend change signal.

A breakout above the 2015 high of .008629 would also be a bullish event. Since the record high was posted in 2011, the yen has made lower annual highs and lower annual lows for four consecutive years. Therefore, a breakout above a prior year’s high would alter the price structure on the macro timeframe. 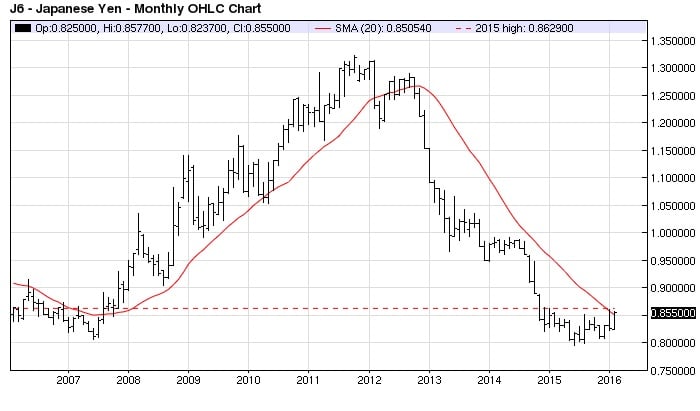 If you see either of these events materialize, you will know that it’s finally time to get back on the long side of the yen again. To be forewarned is to be forearmed. We just forewarned you. Now it is your responsibility to get your trading plan lined up so that you are forearmed and ready to capitalize on the opportunity.