The Ratio Is Ready to Rumble

Gold and silver are highly-correlated. Making a bet on the direction of one of these metals is, by default, betting on the same direction in the other. As a matter of fact, silver is often referred to as “poor man’s gold” because you can buy it at a substantially cheaper price and it still exhibits the same trend as the yellow metal. If you overlaid the price charts of gold and silver and take off the price scale, you’d have a pretty tough time determining the difference between the two. 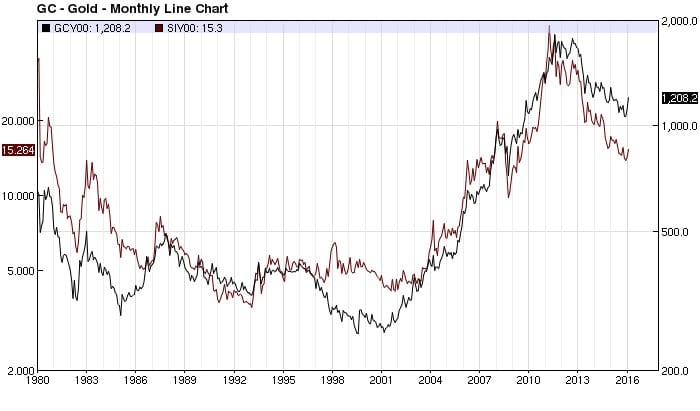 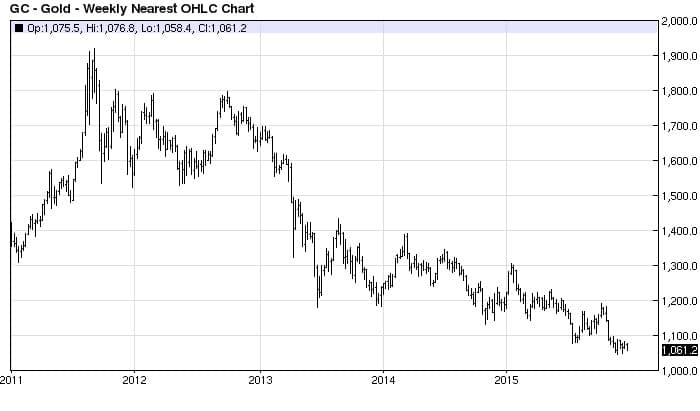 As proof, look at what has happened during this multi-year bear market in precious metals. Gold peaked at an all-time high in 2011 and declined nearly 46% into the December 15th multi-year low. During this period, the gold/silver ratio went from just below 32:1 to 80:1. That means it took thirty-two ounces of silver to buy one ounce of gold in 2011 and it now takes about eighty ounces of silver to buy that same ounce of gold. 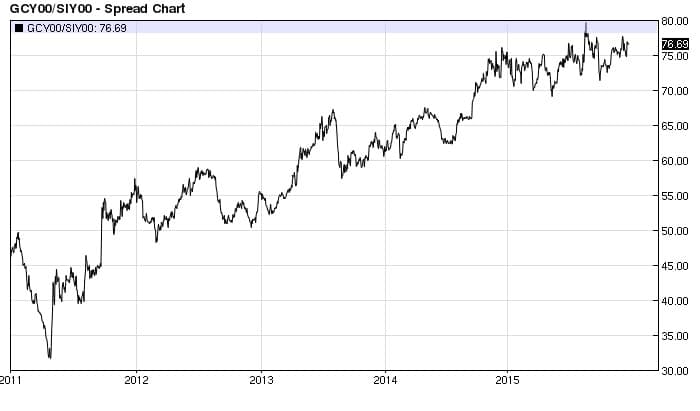 The Ratio: Then and Now

Either we should now be at the top of the gold/silver ratio and the bottom of the multi-month decline in precious metals…or else we are at the point where there is a blow-off acceleration in the ratio while gold and silver plunge to new multi-year lows.”

As it turned out, the ratio surged to 80:1 over the next eleven months. After making a sharp break into the October 2015 low, the ratio recovered and is back up to either side of 80:1 right now.

The 80:1 ratio level is worth keeping an eye on. On the weekly nearest-futures chart, the ratio peaked at nearly 85:1 back in October 2008. This was during the depths of the financial crisis. Prior to that, the ratio peaked at just over 80:1 in May 2003, which was not too long after the end of another bear market in equities. The ratio peaked just under 86:1 in February 1995.

Can the ratio go higher from here? Sure, it can. I just told you that it hit 85:1 in 2008 and 86:1 in 1995. Heck, it even made to a record high of 101:1 in February of 1991 when silver was at the bankrupting low of three and a half dollars-per-ounce. But the probabilities are that the ratio has reached a major top or it is at least very close to one.

Is the Third Time the Charm?

The last two times the ratio got to 80:1 on the nearest-futures weekly chart, it did not stay there very long. The ratio nearly hit 80:1 (close enough!) in February of 2003 and made the final high four months later. The following spring it was down below 52:1.

The ratio reached 80:1 again in October of 2008, peaking at a thirteen and a half year high of nearly 85:1. It spent most of the fourth quarter flip-flopping either side of 80:1 before it finally decided to head south and not look back. A year after the top, the ratio was down to 59:1. A year and a half after that, the ratio was trading below 32:1 for the first time in over three decades. 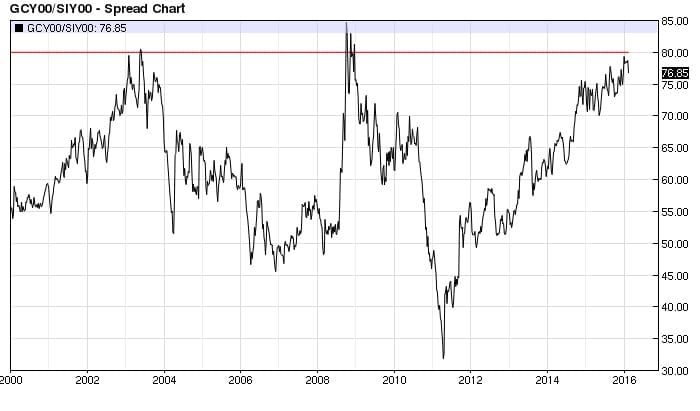 Now that ratio has reached 80:1 for the third time this millennium, the smart money should wager on a reversal. Because the ratio often declines during a bull market, the implications are that the multi-year bear markets in gold and silver should be coming to an end as well. Is it any coincidence that gold rallied from near a multi-year low to a twelve-month high since the year started just six weeks ago? Or that gold closed above the weekly 100-bar Moving Average last week for the first time in about two years? Last year’s high was established after gold rallied into this same weekly 100-bar MA and rolled over. Perhaps last week’s successful breakout is a strong tip-off that the bull market has started.

October 2008 marked the high for the nearest-futures gold (100 oz.)/silver (x8,000/oz.) spread when it topped at a fifteen-year high of +$3,830 (premium gold). This occurred during the depths of the financial crisis. The gold closed at a premium several times during the fourth quarter of that year. However, the longest sustainable streak for the premium on gold was five consecutive days and silver still closed with the premium about two-thirds of the time (44 out of 64 trading days). The point is that this spread can’t seem to sustain a premium on gold. A reversal may be around the corner. 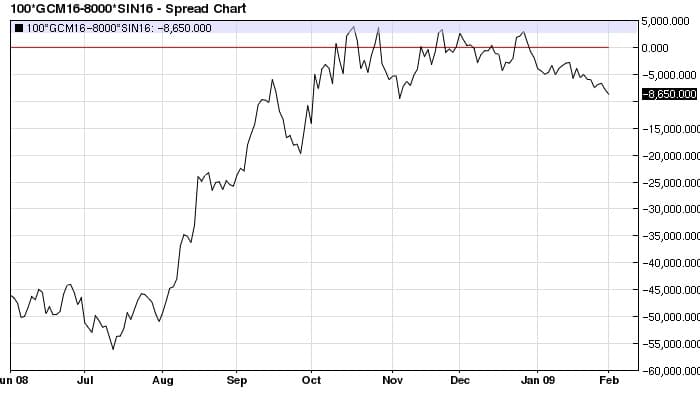 Naturally, one would want to know what sort of downside action the gold (100 oz.)/silver (x8,000/oz.) spread is capable of. This would give you an idea of what sort of targets to shoot for and help traders determine potential reward-to-risk ratios on trades. 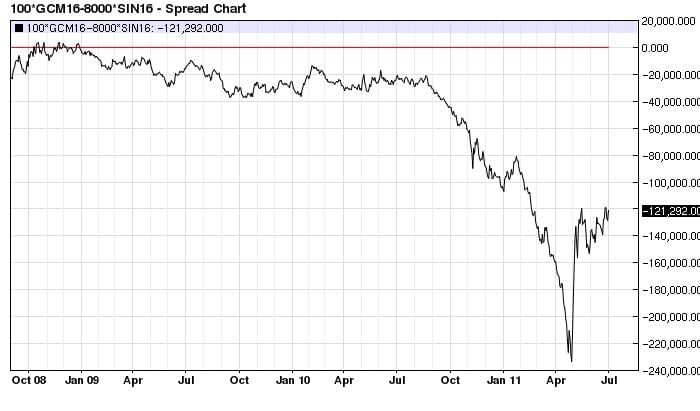 After peaking with the premium on gold in 2008, the spread declined to a record -$233k (premium silver) by 2011. This broke the prior record of -$218k in 1980. However, these two events occurred during historic bull markets in precious metals. We probably shouldn’t get our hopes up on something like this occurring again in the near future. 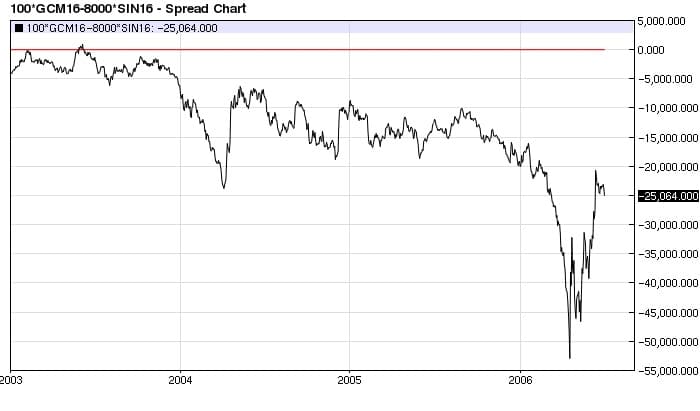 The spread did descend to -$60k (premium silver) a few years after the 2003 top was established. This sort of downside seems a bit more realistic. 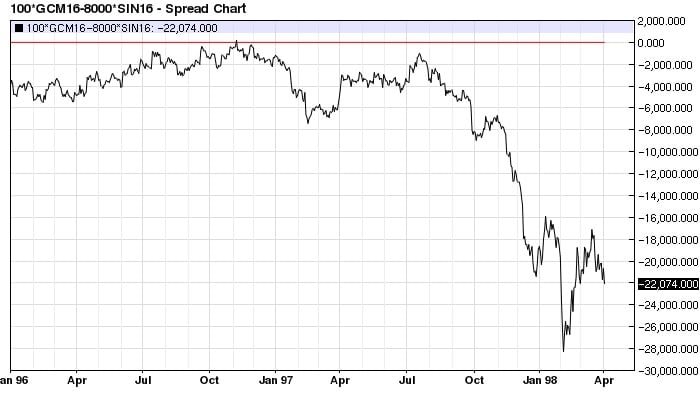 Targets as Per the Ratio

We can also use the gold/silver ratio as a potential guide for where the gold (100 oz.)/silver (x8,000/oz.) spread could be headed when it finally turns over. The past is not a guarantee of the future, of course, but it can show you where the path of least resistance is located.

-Following the peak at 86:1 in 1995, the ratio experienced a three-year bear market that took it to approximately 41:1.

-Following the eight-year high of 80:1 in 2003, the ratio experienced a three and a half year bear market that took it to just under 46:1.

-Following the thirteen and a half year high of nearly 85:1 in 2008, the ratio experienced a two and a half year bear market that took it to a multi-decade low of less than 32:1.

So, guessing that the gold (100 oz.)/silver (x8,000/oz.) spread will top out either side of ‘even money’…and that the ratio could head below 50:1…and that a drop in the ratio will be accompanied by a rise in the price of precious metals…the conclusion is that the gold (100 oz.)/silver (x8,000/oz.) spread could be heading on down to -$81k (premium silver) over the next few years.

First, we’re talking about a ratio of 50:1. That’s still higher than where it eventually landed during the previous three bear markets (bull markets in precious metals).

Second, I was calculating as if silver moved up while gold prices were flat. The ratio tends to drop when metals are rising, so it’s most likely going to happen while gold is on the upswing. Therefore, silver prices will have to go even higher to get the ratio down to 50:1. If gold rose to $1,500/oz. and the ratio was at 50:1, silver would have to hit $30/oz. This would put the difference between 100/oz. gold and 8,000/oz. silver at -$90k (premium silver). Now that would be something worth trading!

Right now, the June-July gold (100 oz.)/silver (x8,000/oz.) spread is just a stone’s throw from the mid-August spike high of -$688. This is obviously price resistance. A peak either side of last summer’s high could establish a double top. A sharp breakout above it, followed by an immediate reversal lower, would trigger a Wash & Rinse sell signal. This failed breakout pattern could be even more bearish than a double top. 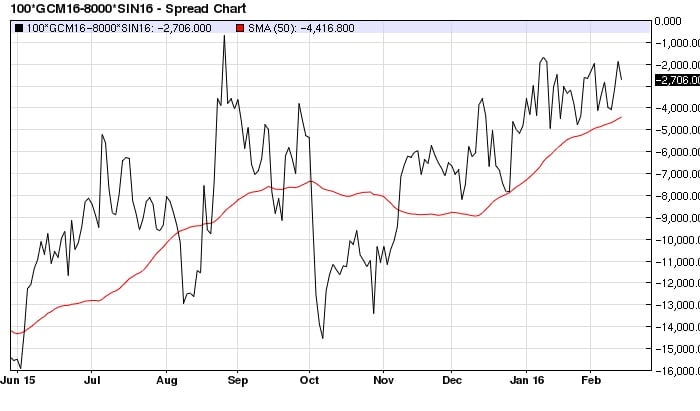 Furthermore, the spread has closed above the rising 50-day Moving Average every single day for more than three consecutive months. This is bullish. However, a two-day close below the rising 50-day MA (currently around -$4,417) for the first time since early November would be a bearish event that traders could use as an indication that the run is over.

Brian Fantana once said, “sixty percent of the time, it works every time.” I like to think that the method of using history and technical analysis for trade selection and market timing is a little bit better than that. Still, even if we could be right on 99% of all our trades, that one percent could kill our trading careers if it’s not managed well.

We know that the gold/silver ratio has been unsustainable above 80:1 the last couple of times it made it to such nosebleed levels. This tells us which way to bet.

But markets occasionally rewrite history. Therefore, it is important to have some sort of preset criteria that tells you to abandon ship when that the improbable is happening and that your bet is losing. You can always get back in later. Risk management is what allows you to always comeback and fight another day, no matter how bloodied you got in today’s scuffle. Therefore, don’t even think about getting short until you’ve figured out where you’ll bail out if you’re wrong.

Jason Pearce
Jason Pearce is a 25+ year veteran of the futures markets. Since 1991, he has played the roles of retail broker and managing director of a brokerage firm, trader, market analyst, newsletter writer/editor and trading systems/algorithms developer. Jason is now actively managing money as an independent RIA.