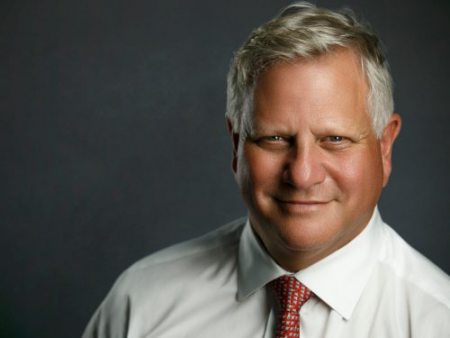 Peter: I’m having t-shirts made. “I survived the bear market of Tuesday.”

Michael: I know. I called my therapist because the market opened lower 2 points the other day before it rebounded. The thing is, market has a mind of its own. Let’s talk about that. I’m not one to pick market tops but it just seems everyone and their brother at this point have said the market’s put in a top … You know how they say, “The market can stay irrational longer than you can stay solvent,” that’s usually when the market’s on the downside but the market spent the whole quarter rallied up against the top Bollinger band. Have you ever seen anything like this in all of your trading?

Peter: I look at myself as an economic historian and you try to put things in perspective. We’re breaking so many records here in terms of length of time without a pickup of counter trend movement, so in the sense that we’ve been up, we haven’t seen down three percent days. We haven’t seen even a down one percent day. We’ve been up 14 months in a row. Last year there was never a down month. That’s never happened. If we had this month, assuming we stay positive for the last two weeks, that would be 15 months in a row. I think that trading is such that one always goes broke betting records will be broken because they’re difficult to time and you go broke betting against records being broken because eventually they are, and this is the tricky part in the marketplace today where it’s so overbought for so long a period of time that every day the …

I kid around, right? The S&P is two handles off their highs. The top must be in. Markets do not go down quickly from extremely overbought conditions. They may have a day or two counter trend movement, but big moves happen when they’re already oversold. Look at all the largest moves to the downside, whether that’s a Macy’s or a GE or if you go back to Valeant, they’re down, they’ve been down, they’re oversold and then they accelerate. We’re too overbought here to get particularly negative. Trading is a second derivative issue. We need that second derivative right now to slow down the market. Once it slows down, and how do you define that? Maybe the differential between the current price and the 200 day moving average, so either the market is gonna go sideways for a little bit, correct a little bit and give that opportunity for the 200 day moving average to catch up.

Michael: Yeah. I appreciate that. I agree, the markets don’t go and turn on a dime and go the other direction. There’s a little distribution and it gives you some heads up before it wants to make a big turn. I wanted to talk to you about … You’ve seen markets that have gone parabolic. You’ve seen markets that have crashed, famously crashed. You were in those trades. Can you remember being that you’re a historian, anything that has kind of taken hold or taken a grip of people as much as blockchain or any of the fascination around cryptocurrencies?

Peter: No sir. I think that every good thing has a mirror. One of the mirror issues of today in cryptocurrencies is the fact that the barriers to entry of trading or investing have never been so low in the sense that you can open an account anywhere, you don’t need to be a sophisticated investor, you don’t have to have much knowledge and what I call the cocktail conversation of, “Hey, you’re in bitcoin? Oh, I’m in bitcoin. Great. We must both be smart,” and then somebody else comes into the room and goes, “Oh, I’m in bitcoin too.” That becomes a crowded trade issue.

Is there a future in this? Of course. I want people to remember that we look back where Amazon is today and I try to say, “Never minimize the pain when looking backwards from a positive outcome. Amazon went down 95 percent from its initial peak of 100. It went down to $5 and now of course we know where it is. In bitcoin, if you want to buy it, you need to wait until you’re too afraid to buy it and all your friends are telling you that you are absolutely crazy. New technologies go through this process of low barriers to entry. Many, many different kinds of cryptocurrencies, and there will be a flush out. Most will go to zero and then there will be winners just as there was in the 1920s with automobiles and radios and in the 1960s, and in the 1990s with the start of the internet.

This is an economy where the winners win and the losers lose, so if you want to do this, don’t put it all into one particular crypto or in a single investment strategy. You may want to diversify across many, so if you do 10, you may have one or two winners. Eight might be losers.