What Does An ‘OIL GLUT’ really mean?

The terms “glut” and “oil” have become almost inseparable the past 18 months.  Fueled by an obsessive focus on inventory and production levels, it has become an easy narrative.

The Cambridge English Dictionary defines a ‘glut’ as:

A supply of something that is much greater than can be sold or is needed or wanted.

A glut is often associated with low prices, or an expectation of low prices.  An extreme example of a supply ‘glut’ can be seen in the electricity markets through real-time electricity prices.  Whereas most commodity markets exist with a storage system under-pinning them,  this is not the case for electricity markets (but for limited battery and hydro storage).  As a result, when power has been generated in excess of demand, market prices have to move low enough to clear this excess supply.  As a matter of fact, this market clearing price can even be less than zero (negative), meaning the producer has to PAY the consumer to take the product off their hands.  The negative price reflects the ‘cost’ the consumer incurred to accommodate that supply into their system.  Without a storage system in place, market regulations require utilities to hold enough generating capacity to cover the highest projected demand for the year plus a reserve margin.

A robust storage system helps to smooth day-to-day and seasonal differences in supply and demand and reduces traditional production capacity requirements.  In this way, storage acts as an alternative form of supply and demand by allowing product injections during times of over-production for use in times of under-production.  The natural gas market in the US is a good example of this.  Total natural gas production capacity exceeds total demand in the summer, but isn’t enough to meet total demand in the winter.  Using storage however, production can continue at a relatively stable level throughout the year, with excess being injected into storage in the summer for use in the winter.

Storage levels then become the ‘glut’ indicator, unlike the electricity market which doesn’t have a buffer between differences in supply and demand.  At the extremes, conventional storage systems either become too full to accommodate additional supply, or too low to accommodate projected future seasonal demand.  In either case, price signals emerge in an attempt to rectify the situation.

An inventory shortage or excess can be either perceived or real.  Real inventory issues show up in the spot market.  Perceived inventory issues are based on assumptions.  These assumptions are anticipated as threats to the spot market at some point in the future and are expressed via the futures market.  If these assumptions don’t manifest into the spot market over time, assumptions regarding the ‘future’ will ultimately be revised.  Think of flowers delivered on Valentine’s Day.  A month in advance, the market establishes a clearing price for flowers delivered exactly on February 14th.  There are even discounts offered for flowers delivered the day before or the day after February 14.  These are based on perceived value.  Come Valentine’s day, those who forgot to place their order and need flowers are now forced into the ‘spot’ market and may be willing to pay multiples of the original price for delivered flowers, or they may luck out and find an overzealous store stuck with too much delivery capacity.

With that in mind, let’s circle back to the aforementioned ‘glut’ in the oil markets.  The prevailing narrative is that there is too much supply for the current level of demand.  The evidence being used to support this narrative is inventory levels.  High inventory levels are perceived as a threat to the spot market.  As long as there is still room to fill conventional storage, producers have the option of storing their barrels or selling them.  In this way, spot prices are linked to futures prices.  In a perfect world, the difference (spread) between the spot price and the next futures price should reflect the cost of storage capacity.  Of course, the cheapest storage options will be used first.  As these fill up, spreads may widen to value the next most economic form of storage and so on.  This is why it has been traditionally assumed that a widening spread, or contango, may be signaling a market oversupply.  On the other hand, if spot prices are higher than futures prices, those with barrels in storage will withdraw stored barrels to capture a higher spot price and eliminate storage costs.

Take a look at the 1-month price spreads in WTI futures since the beginning of 2017: 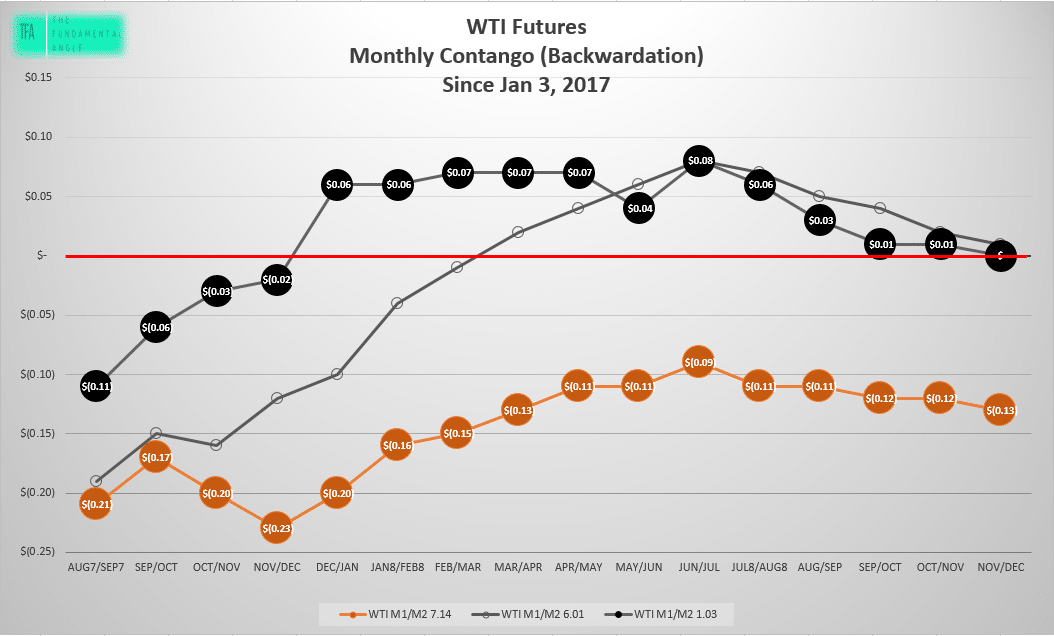 At the beginning of the year, the front of the futures market was trading at a slight contango from one month to the next (the black line above).  However, starting with the Dec-17 contract, the market had moved into ‘backwardation’.  This market structure makes the decision to store barrels uneconomic and should have induced producers to sell their barrels into the spot market.  You can see that by June, the backwardation in the futures curve had been pushed back 3 months (the grey line) and by last week that backwardation was gone.

The effect of the shape of the term structure seems to have had the desired effect on inventories, as storage has been drawn down significantly since April:

Total Petroleum inventories have been reduced by over 50 million barrels since the beginning of April, 2017.  This is significantly higher than inventory withdrawals in the prior 3 years.  As a result, total inventory levels are now slightly below where they were at this time last year but still above levels of the prior 3 years: 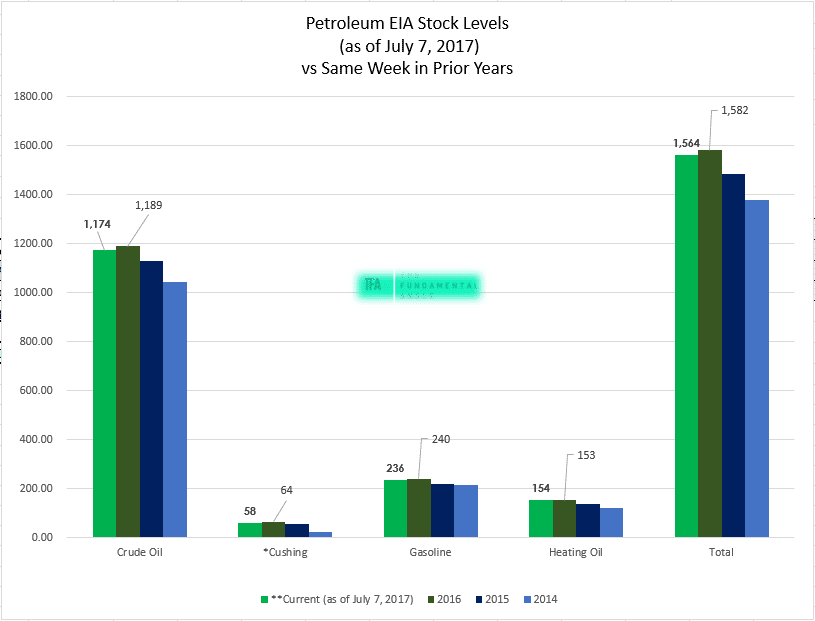 Once the incentive to store barrels was reduced, they were instead pulled out of storage and moved to market.  Pulling over 50+ million barrels out and selling them into the market put pressure on the front of the futures curve relative to the back (seen in the chart below): 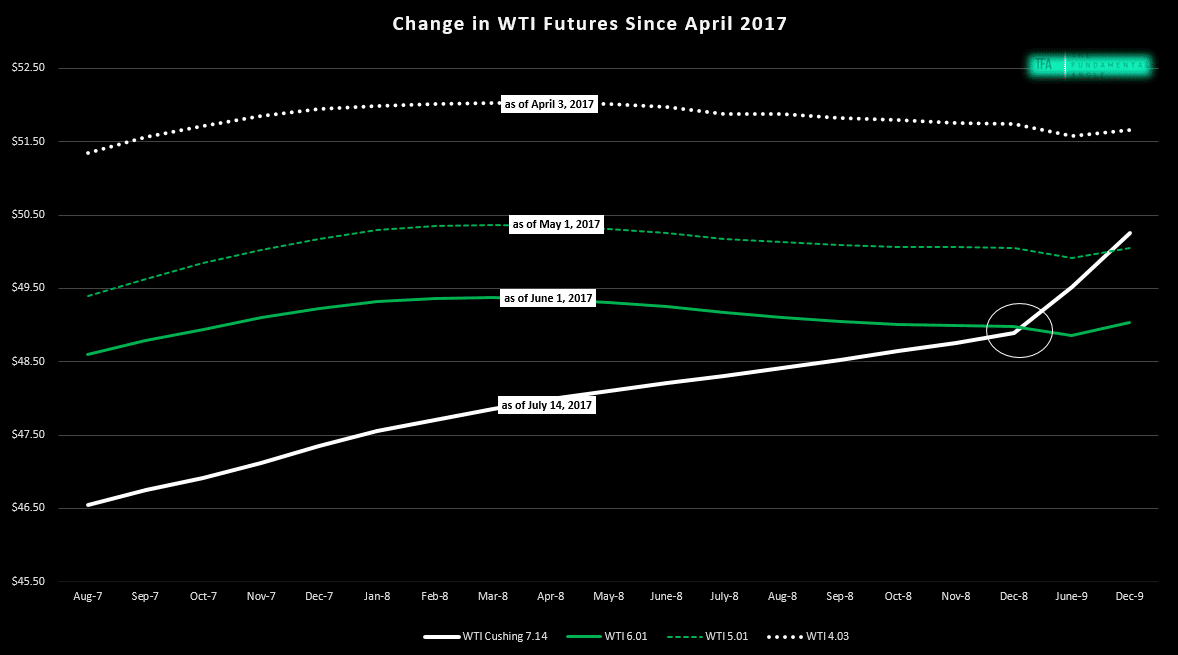 As a result, the December 2018 contract is now close to $2.00 over the December 2017 contract.  While that may sound like a lot, it’s just a little over $0.15 a month compensation to defer payment on your production.  Since the seller of oil doesn’t receive payment until after the oil is delivered, holding it in inventory doesn’t generate cash.  As a matter of fact, holding oil in inventory costs money (via the tank storage cost).  With all the news coverage this past year regarding the need for cash, it’s no surprise producers would rather sell now versus hold inventory.

Oil inventories are often expressed as “Days of Supply”.  This is essentially total inventories divided by daily demand.  Over the past 10 years, we have gone from just under 25 days of supply to a little over 30 days as production has increased and demand has flattened (as seen below). 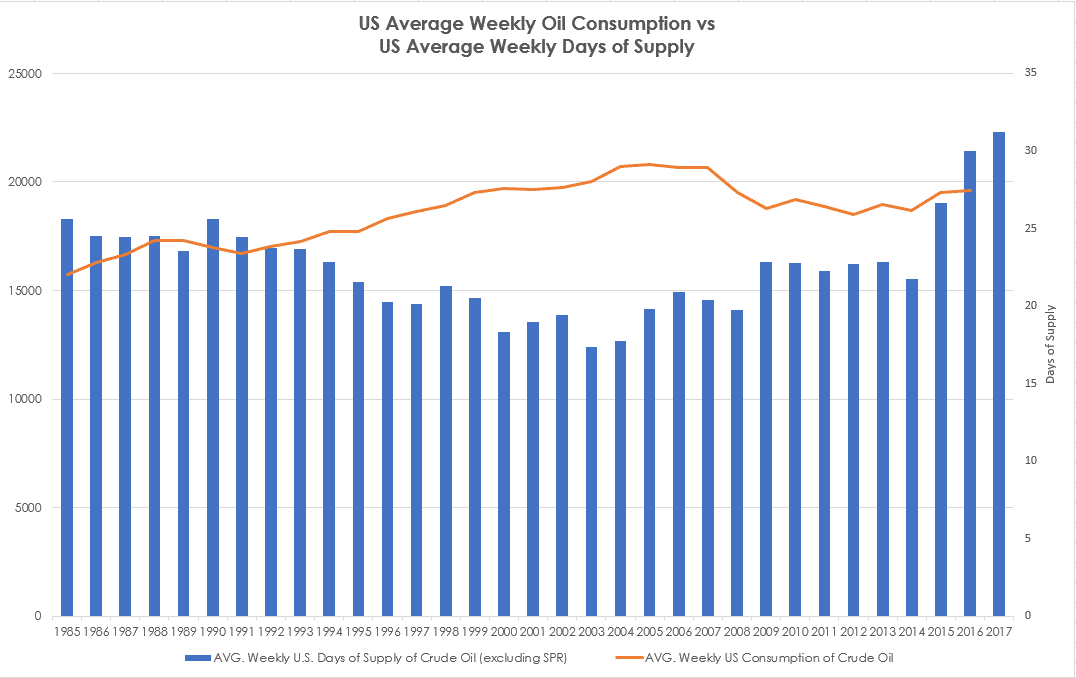 This assumes oil inventories can transported to refineries to be processed as they are withdrawn.  I use ‘days of supply’ to put the phrase ‘inventory glut’ into perspective.  Is just over a month’s worth of crude oil held in inventory to meet our current demand needs something you would consider excessive?  Since we still rely on imports for over half of our crude oil needs in the US, this doesn’t scream ‘excess’ to me.  But, as in any business, holding inventory is expensive and it’s a delicate balance to determine the optimal balance between margin and cost.  Assuming there are decent margins to be made, it would be logical to assume more inventory would be held at low prices versus high prices.

What is The Signal?

As Nate Silver discussed in his book “The Signal and the Noise” (2012), we seek to extract signals and eliminate noise when building models with historical data to
predict the future.  However,  while the final outcome of an event is subject to influences that will repeat themselves in a foreseeable way in the future, it is also subject to a great deal of noise that will not repeat itself in the future in a predictable manner.

I believe the ‘signals’ we have been receiving from the oil market have moved from ‘price’ signals to ‘volatility’ signals.

Increased production and storage capacity in the US have reset oil prices from $90 to $45 in the past 2 years. As a result, production costs have been targeted and optimized.  What remains is a larger, more efficient system with a lower convenience yield that may be less prone to significant price moves in either direction.

However, low volatility also makes it more difficult to justify new assets as it reduces projected returns (all other things being equal).  With long lead-times to build new assets like pipelines and export infrastructure, a sustained period of low volatility will have impacts not realized for many years in the future.